skip to main | skip to sidebar

The Genesis of Wanderlust

If you've grown up travelling boxed in a huge rectangle on metal wheels, it is unlikely that you will be an avid traveller. If you spent most of your journeys devouring Hardy Boys & Enid Blytons on the top berth, you are even more unlikely to undertake a journey just for the journey!

If however, you naturally relate to verdant hillsides, lush green woods, the sound of gushing streams; if you know what it feels like after 5 minutes under a waterfall that's crashing on to your back and head, you genetic inclination may have triumphed over your circumstances! Wanderlust may still get you!

Man was meant to be an outdoors animal. This entire business of air-conditioned offices & laptops is ungodly!!!

I'd been mentioning this to a friend of mine for some time & he's been goading me to accompany him on a bike ride through the wilderness, but my conditioning kept making me postpone the trip. Finally about 2 weekends ago, I made the trip.

I travelled on Saturday night to Bombay, where we were to begin the trip from early Sunday morning. Now early mornings are not something BPO-ites are programmed to do; but we did manage to set out by a very sunny 11 AM. We made 2 stops for fuel before we hit the highway out of Bombay. 2 fuel stops, you ask? What were we riding? No, the Thunderbird isn't a fuel guzzler but we are!!! So after the Bharat Petroleum stop, we rode to Dara's Dhaba, parked the Thunderbird and swaggered in. We looked for a nice shady charpai, got rid of the shades, leaned back and ordered a hops flavoured brew that is more coolant than fuel! The shade cooled us from the outside, the brew from inside, light snacks & some heavy conversation (my friend leans towards the right & I'm a moderate) later, we were smiling relaxed smiles & looking forward to the trip.

Surbex T (my friend, the biker) decided to ride first as I'd never ridden the Thunderbird for long distances before this, least of all on the highway. It was my first bike-trip after all!

Surbex turned out to be a road-rules respecting rider, and initially I tried getting into the swing of things by trying to appreciate the multi-hued scenery that you encounter on the highway out of Mira-Bhayandar; but the fun caught up when I started enjoying what we had set out to enjoy... the ride! The sheer excitement of watching the Thunderbird gobble up road, knowing that you're leaving the city & vehicles behind, just enjoying the experience of being on a bike. If it weren't for the helmet, the wind-in-your-face element that is such an inseparable part of enjoying a bike ride, would've added to the thrill! I am of course omitting that the dust would've played havoc with your eyes, face & hair, but that's what city-slickers think like. I must think like a rider!

I took over from Surbex, after a while. I've always found the Thunderbird very easy to handle, and slowly I let her rip! I got to 104 kmph when I felt Surbex gently tapping me on the shoulder. Out of respect for his nerves (not mine, mind you!), I came back to cruise mode. The thrill of that short stretch, the experience of "biking" was slowly putting me in a very good mood!

We stopped at Mastan Naka to "re-fuel". A light lunch of Dal-Fry & Kadak Tandoori Roti later, we were on our way to Sajjan.

The road that leads away from Mastan Naka towards Sajjan, takes you into a different world altogether. It is impossible to imagine that merely 80 kms outside of Bombay, there are villages where people live in thatched roof houses & draw water from wells! India truly is bounteous and diverse!!!


As you go on, the road gets more & more deserted, the ride gets quieter and the air gets cooler. You pass Sajjan and head towards the Dam that Surbex keeps talking about as if it's paradise. I can understand why he speaks of it there. He's been there so often, done such speakable (& unspeakable) things there, that he practically owns the place.

About 30 minutes after we took the turn from Mastan Naka, Surbex goes off the road. We ride over the gently undulating dirt path for a while, then the Thunderbird skillfully negotiates a slight rise in the dirt road & suddenly we're in view of this vast expanse of cool, deep-blue water body. This is our destination. It's a river that has been stopped by the damn & the reservoir is straight out of Nat Geo!!!

It's fairly close to what Surbex has been describing it as. It's peaceful, it's cool, it's quiet. We spend some time in idle chatter. Surbex is distraught because his favourite tree has fallen. He oscillates between decrying this to me & talking to the stump of the tree... yes, I have some very strange friends. At least they're all real friends!

We proceed to the small waterfall that is formed by the dam letting some water through. It's not an easy path. One has to be almost goat-like sure-footed in order to reach it without slipping & falling! The water actually falls from a height & has the potential to hurt less able-bodied people! Surbex & I strip down to our undies (or his undies & my boxers to be precise) & venture under the "waterfall". Initially the force of the waterfall is a little intimidating; but we're brave young men. Plus we're already semi-naked, so no point turning back now. (How many times have you done that, huh?) So we slip under the waterfall, and let it beat down upon our heads, neck & backs. It's cold & we slip out almost instantly. Then we realize that it's colder outside when you're wet, so we slip back right under it. I had to because my left arm cramped the first time I went under it. So I went under it the second time to let the force of the water massage my cramp out! The waterfall oxygenates me & thrills me! I step out & roar to the world, "THIS IS WHAT MAN WAS MEANT TO DO!!! NOT SIT AT A DESK ALL DAY IN FRONT OF A LAPTOP!!!". Surbex, equally excited, joins me and hollers to the world, "LISTEN TO WHAT THIS MAN IS SAYING... HE IS RIGHT!!!" Not that there's anyone there to hear us. Not that they would've paid heed had they been there...

After 4 trips, it's clear that any more cascading water on our backs will lead to bruising or worse, vertebral dislocation. We step away, towel off, get dressed and decide to call it our "Brokeback Waterfall"! I'm going to get into trouble with my wife for saying such things... 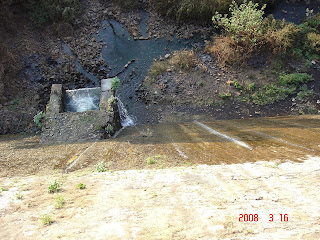 Night falls quickly. We spend a couple of hours lazing on the stone & concrete dam. It's a clearer sky than in the city & one can see the stars. If we were younger, we'd be drawing Orion in the sky! We decide to head back once we've had enough conversation (we're not women for God's sake!)

I want to ease the "bird" down the rough but Surbex has some reservations. After some cajoling on my part & much pondering on his, he decides to take the risk. He thinks it's risky for a first time Thunderbirder to try off-road descent, with a pillion, but he's a brave boy. What he doesn't know that I am a natural. I ease the bike down so smoothly that he is impressed. I tell him that if I'm on a good bike, the man & the machine become one! He is very kicked about that statement!

I ride on gently over the aforesaid undulating path, enjoying the silence & the cool air that the night offers. I am transported to a trip to Goa about 5 years back. It brings a smile to my face. I realize that one of the things that makes me happiest is feeling the breeze in my face on a bike. I also get in touch with why I've always loved the night so much! It's the most relaxed time of the day.

I ride back until Surbex feels the urge to ride. He then proceeds to drive rasher than he has all day! Thankfully, he has to stop for dinner!!! Dinner is Dal fry & tandoori roti again! :-) I haven't done this highway dhaba food in 8 years maybe! What was I doing all this time???

Post dinner, Surbex decides to give me another scare; he cuts through two trucks driving alongside for a brief rush of adrenaline!

I holler at him, ask him to pull over, take over & promptly return the favour! :-D

This is fun, but I realize that we're tired and need to ride carefully. We do so, with the help of some terrible dhaba chai. We get into Bombay about 3 AM, thoroughly kicked, but just as exhausted.

I'm a convert! I intend to join Surbex on more of these trips, longer ones too which will entail lugging his 5-man(!) tent around. Don't ask me what he had in mind when he bought it. I might say something very incriminating!!! I am even considering buying a Thunderbird sometime late in the year. I know now that I will see more of India on a bike than I will in a car! It's so much more personal. And a LOT MORE FUN!

Apologies but Moderation is a necessary evil, what with spam, bots, flamers & trolls abounding.
The publishing of any comment that is abusive or way off-topic remains at the discretion of the administrator.
Thank you for commenting.